The do-it-yourself spirit is alive and well in Sailrite customer Jack Rosen. Jack will try his hand at making just about anything. He’s successfully built airplanes, cars, and even a business! With all of those skills it’s no wonder that Jack would be a do-it-yourselfer for his sailboat too. 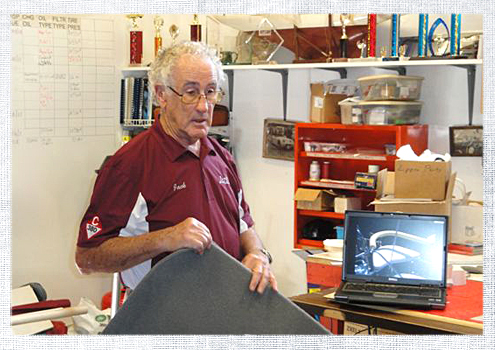 Jack first became smitten with sailing while living in Toronto. He was spending his free time racing cars when a friend convinced him to try racing sailboats instead. So Jack went out on Lake Ontario with his friend on a 35-foot R-boat.

“I became fascinated with it,” Jack said. “I am allergic to grass, and when I was out on the water, away from everything, I felt like a weight was lifted off my chest.”

It wasn’t long before Jack bought his own sailboat and began competing in regattas. On his Lightning 19-foot daysailer, Jack raced against the New England and World Lightning Champions.

“I learned more about sailing from that Lightning,” Jack reminisced. “You could see the changes instantly.”

It was also during this time that Jack was first introduced to sewing for his boat. He met a sailmaker, and together they sewed sails for the Lightning on Jack’s living room floor.

Eventually, Jack moved to New England, where he wasn’t close to the water and so he sold his boat to one of his crewmembers. When another move found him near Cape Cod, he quickly purchased another Lightning and later a Catalina 380.

The Catalina needed a new sailcover and Jack knew that he could do the project himself. He borrowed a Sailrite Yachtsman sewing machine from a friend and created a custom sailcover that comes apart at the Dutchman lines and splits into three pieces.

After that project Jack and his wife had the hull of the boat repainted, which left their hand-me-down canvas clashing with the boat. Not wanting to borrow a sewing machine for all the projects now on his list, Jack called us up, talked to Eric for advice about which machine to get, and ended up with a Sailrite Ultrafeed LSZ-1 Sewing Machine.

With his new machine at the ready, Jack set up a sewing station in his garage workshop. He created a cut-out for his machine in his work table, dropped the machine in and created a sewing table.

One of the first projects he tackled with his Ultrafeed was a new bimini. He took the entire bimini frame off his boat and rigged it up in his workshop. Then he built a new bimini patterned directly off his frame.

“I’ll just go around our boat and make things,” Jack said. “It’s just so handy to create something you want.” 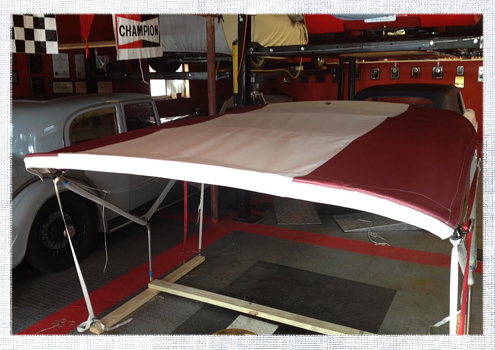 The finished bimini rigged up in the garage

Jack’s Catalina lead him to join a local sailing club, The Catalina Association of New England or CANE. The club provides monthly seminars on various aspects of sailing for its members, and Jack was asked to give a seminar on sewing for your boat. When it was listed, forty people signed up and Jack had to split the class into two sessions to accommodate everyone in his garage workshop.

Sailrite helped sponsor the event, providing catalogs for all attendees and copies of our Make Your Own Cushions DVD and Make Your Own Full Boat Enclosure DVD to raffle off as door prizes.

“The main theme of the seminar was to tell people that doing canvaswork is not a black art. It’s far easier than you think it is. You just need to know a few things, and Sailrite can help teach you those things,” Jack said.

Jack was nervous about how the day would go, but the informal seminar was a big hit among the CANE members.

“I was very concerned,” he said. “I had planned to just show pictures and talk about needles and the machine, but [the conversation] went on and on.”

Jack answered participants’ questions for two and half hours. Beyond sewing, they also talked about needles, thread, fasteners and how to punch holes. “All the little things that scare people,” Jack said.

“I brought the little grill from our boat and we grilled out afterwards. Everyone had a really good time,” he added. “Several of [the attendees] are sewing away right now.”

Jack hopes to offer the seminar again next year if there is enough interest. 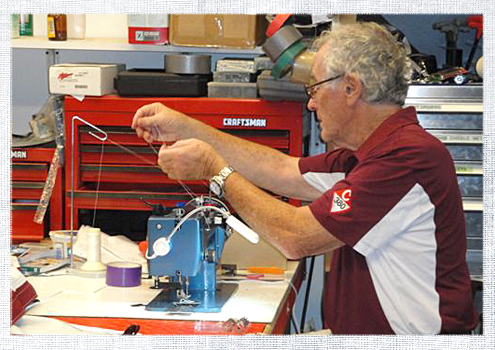 He enjoys sharing the projects he has worked on in hopes of inspiring others to make things for themselves, too.

“You get a sense of accomplishment. It helps you appreciate your boat a little more,” Jack said about doing his own canvaswork.

His advice to aspiring DIYers is to “just do it.”

“Practice on scrap material and learn as you go along.”

He also recommends watching Sailrite videos to help with projects.

“Watch the videos, first of all,” he said. “If you need to, start with a simple machine and then make the investment for the Ultrafeed and put it in your will—it’s going to outlast you.”

Jack sails his Catalina frequently in the summers with his wife, 10 year-old grandson and their Russian Wolfhound, Darby, out of New Bedford Harbor in Massachusetts.