By Nikki
Other, Sailing
7 Comments

2004 was a big year for Paul Seeberg. It was the year that he and his wife, Millie, bought a MacGregor26 sailboat and started sailing with the North East Trailer Sailor’s Club. It was also the year that Paul began sewing for his boat. Ten years later, Paul is still hard at work on boat projects and sharing his passion for sailing and sewing with others.

Paul’s sewing projects began humbly when his wife wanted some curtains for the cabin of their boat. Paul had some basic sewing skills he had learned in 8th grade home economics class and he figured he could sew curtains. Along the way, he had some difficulty with the project and called Sailrite, where he got some helpful advice for his project.

On completing his curtain project, Paul figured that sewing for the boat was something he could do more of, so he bought a Sailrite Ultrafeed Sewing Machine and started working. He started sewing sheet bags for himself and then for other members of the yacht club.

“Following [Sailrite] videos, I made a hatch cover, curtains, pillows, a really nice binnacle cover, and a lifesling cover,” Paul said. “We’re the only boat in the harbor with a red Sunbrella lifesling!”

Some canvas projects he made mostly for the fun of sewing, not because they are a necessity on his boat.

“Some times I make things just for fun, like the hatch cover. But it made a big difference keeping the cabin cooler,” he said.

After getting all of those projects under his belt, Paul felt ready for a bigger challenge. He needed a new dodger. He had the project quoted by a few canvas shops, but they were asking too much money. Paul knew that after all the projects he had done so far he could make his own dodger for less.

Paul watched Sailrite’s How to Make Your Own Dodger DVD 10-20 times before even started the project, wanting to make sure that he understood every detail.

For large-scale projects like this, Paul believes it’s important to learn everything you can about the project before starting.

“You need to be able to see things in 3 dimensions in your mind. I don’t sew one stitch until I’ve thought through the project beginning to end,” he said.

Paul’s dodger design would test all of his sewing skills. He was going to have to sew zippers, install fasteners, and even make a roll up window.

When Paul started sewing, the dodger project brought on the challenges. The scale of the dodger made it difficult to maneuver and all the material proved tricky to roll up under the arm of the Ultrafeed.

“Making something that’s 10-12 feet long in your basement is difficult,” he said. “It grows quite big.”

Paul credits the video with helping him accomplish such a large-scale DIY project.

“The tips I learned in the video were invaluable. There’s no way I could have made it without it,” he said.

All of Paul’s hard work paid off and his dodger looks great. It’s now the project that he is the most proud of.

“The dodger is the most accurate. It’s done the best,” Paul said. “Because of the sheer scale of the project I’d have to say it’s the one I’m most proud of…it was harder than I thought.”

As with a lot of DIY projects, Paul would do somethings differently on his dodger, but it has been met with rave reviews from his friends and fellow sailors.

“People who go on the boat can’t believe that I made it,” Paul said. “I can see all the flaws, but someone casually looking at it thinks it’s beautiful.”

Paul’s advice to fellow DIY-ers is to know your skill level, to not be afraid of a sewing machine and to be confident. 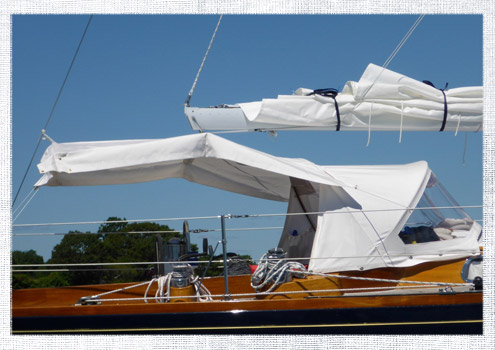 Paul’s dodger and “flying awning.” He made the awning himself and modeled it off other awnings he had seen around the harbor.

Paul feels like he’s had a lot of help becoming a sailor and DIYer and he likes to share the knowledge that’s been shared with him. One way he does this is by teaching seminars at the Boston Boat Show each spring. His current seminar is about transitioning from a small boat to a larger one, but he hopes to teach a sewing class in the future.

“Sewing is not as scary as people think it is. I think a lot of people have the skill set. I want to show them what a Sailrite machine can do,” he said.

For himself, Paul has a list of projects he’s waiting to try next like a sail cover, cockpit cushions and a main sheet bag.